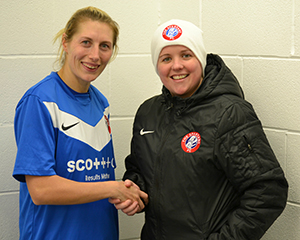 Spartans Women have completed another pre-season signing by securing the services of Tracy Donachie from Hutchison Vale.

Donachie, 31, looks set to bring a wealth of experience to the Club from a career spanning over a decade of top flight football, which has included a hat-trick of stintsoverseas.

“I’m excited for the next part of my footballing journey and what better place to do so than with Spartans”, said Donachie after putting pen to paper at Ainslie Park earlier this week.

She added, “The high intensity of training, a great group of highly talented players and the professionalism behind the scenes that I haven’t experienced since I played overseas were some of the main draws when deciding to sign for the Club” END_OF_DOCUMENT_TOKEN_TO_BE_REPLACED 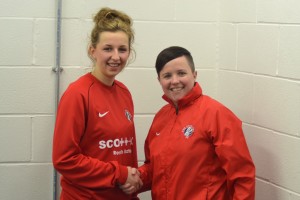 Spartans Manager Debbi McCulloch has added a ‘fantastic potential and talent’ in Natasha McMahon to her squad ahead of the SWPL season.

McMahon, 19, has moved across the Capital from Hutchison Vale and is the latest pre-season signing that will form the nucleus of McCulloch’s plans for the forthcoming campaign.

Speaking after putting pen to paper at the Academy on Friday evening (17th), McMahon said, “I wanted to develop my football further and look for a new opportunity and joining Spartans is a great way to do that.   Having visited here as a player, I know that it is a fantastic club with the facilities to match. END_OF_DOCUMENT_TOKEN_TO_BE_REPLACED 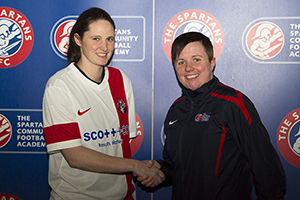 Spartans Women’s Manager Debbi McCulloch has spoken of her delight in securing the services of Defender Ciara Barnes from Glasgow City as preparations get under way for the forthcoming SWPL campaign.

25 year old Barnes will bring a wealth of experience to McCulloch’s  squad ahead of the 2014 season.

On completing her signing, Barnes said, “Spartans are a club with great facilities and I’m impressed by the playing set up all the way from the Youths to Seniors”. END_OF_DOCUMENT_TOKEN_TO_BE_REPLACED