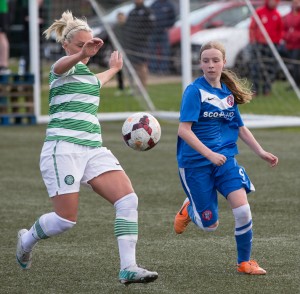 Spartans look to get back to winning ways when they welcome Forfar Farmington to the Academy for Sunday’s lunchtime latest SWPL fixture.

Hoping to make the cut and feature once again in Manager Debbi McCulloch’s squad is teenage midfielder Ronaigh Douglas.  It’s not very often a player at 15 years of age can be regarded as a ‘Club Stalwart with almost a decade long playing career’.  Douglas however can lay claim to that as she first pulled on the red and white jersey of Spartans when she was Primary 1.

This season, the hard yards, dedication and experience of coming through the Academy pathway has seen McCulloch promote the youngster into the SWPL squad from the u/17s.

Douglas is already enjoying the opportunity she’s worked hard to earn.  “It’s brilliant.  Having the chance to train and play in the SWPL side has given my confidence a boost and Debbi is really encouraging and has helped a lot this season so far.”

The pint-sized midfielder made her first start last weekend against Celtic after making a handful of appearances from the bench.

“I was quite nervous when I got the call that I was starting.  But my team mates kept on telling me that I’d be just fine and to go for it!  Having the opportunity at my age is fantastic and it helps my confidence as a player and a person too.”

Douglas has benefitted from playing alongside experienced players such as Captain Katie Reilly & Kerry Montgomery, something that the player is benefitting from on the pitch and at training.

“It helps a lot.  I know that if I make a mistake they’ll give me supportive chat to keep my head up and work alongside me to get the ball back rather than perhaps having a moan because I’ve given it away.  That’s what I like about the team.”

Meanwhile, McCulloch is looking for her side to bounce back against Forfar Farmington and pick up a vital three points at home in an already fiercely competitive SWPL campaign.

“I think we need to play exactly the same way as we did last week against Celtic, only this time we need to get the ball into the back of the net.  I’ve watched the video of the game and it’ll remain a mystery for the rest of my life how we didn’t take something out of the 90 minutes.

The focus this week has been to home in on a few specific areas we need to work on and things have progressed well over the sessions.  With home advantage and the way the players operated last week, it’s given us a great confidence boost ahead of the game against Forfar.

“I’m confident, but I’ve got huge respect for the visitors and I know that we’ll have to perform to the best of our capabilities to get anything out of the game and the girls know that if they do that, then there will be no problems on the day and hopefully get a result we deserve this week.”

The match kicks off at 1pm on the Ainslie Park Stadium pitch.