The Big Read: Alana Marshall talks about a magic milestone and her brave battle with MS 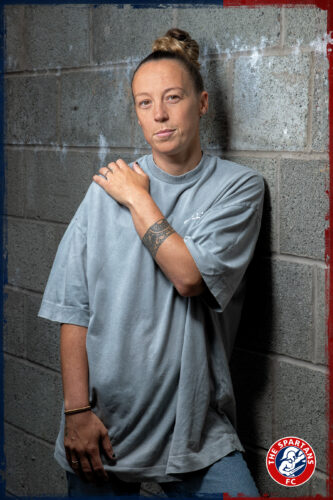 “I’m not going to let it beat me.  There’s not many people who can sit here and say at the age of 35 they can still play semi-professional football, have a physically demanding full time job, a two year old kid and meanwhile live with MS.”

It’s Monday night at Ainslie Park and Alana Marshall arrives in typically punctual fashion ahead of training in preparation for Spartans penultimate SWPL 1 game of the season on the road to Partick Thistle.

Marshall is set to make her 200th appearance, becoming only the third player in the Club’s history to enter the exclusive ‘double centurion’ club.

The fiercely loyal Captain offers a welcoming smile at the thought of leading her side out on such an occasion however Marshall has another tough encounter to contend with – her recent Multiple Sclerosis diagnosis.

In an open and candid discussion, the skipper talked of the challenges associated with the illness and how being part of the ‘Spartans family’ has helped guide her through some of the darker moments since here initial diagnosis in November last year.

Marshall started her career at Falkirk Ladies before joining Hibs.  Her footballing journey then took her to Boroughmuir then Rangers, before heading to Ainslie Park in June 2012, a move she has never looked back on.

“Before coming to Spartans I never truly had the chance on the park to fully play ‘my game’ however when I came here, Debbi allowed me the opportunity to express my ability and made me a better, more confident player.  Pulling on the shirt every Sunday fills me with massive amount of pride.  I love it every time I walk into the Academy, the thrill, the buzz – it’s infectious.

“The number of talented young players that come through the Player Pathway is great to see.  They are the future of this club and their ability is fantastic, as we witness from those who come up and train with the SWPL side.  We have also climbed another rung on the ladder by turning semi-professional too which shows his progressive Spartans is as a club.”

After a spell in Italy playing for Fimauto Valpolicella, Marshall was announced as Club Captain when she put pen to paper once again on her return to Scotland in 2017.

“It’s a massive honour being Captain of this wonderful club, especially when you look at the list of those who were awarded the armband before me and have set the standard.  I always felt as I came to the latter stages of my career I’d love to Captain a football club to utilise my experience and ability as a player and become a role model for any aspiring young female who wishes to be the best they can.”

There’s a pause for composure before Marshall moves on to describe the early days of a niggling suspicion something was not quite right as she sought support and clarity on her unfolding medical condition. 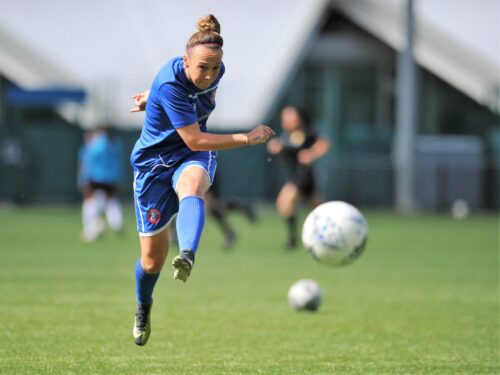 “Back at the beginning I could see my moods fluctuate constantly and I’d be in chronic pain.  I’d come to training and Debbi would enquire as to how I was as she could notice changes in me. I’d burst into tears for no reason – it was a real rollercoaster of emotions that I simply couldn’t pinpoint exactly why I was feeling the way I did.  It wasn’t until February this year when I had a face-to-face sit down with the Neurologist that the reality probably started to kick-in over my diagnosis with Relapsing remitting MS.  When I first thought something was up, I searched the symptoms but discounted MS as I thought ‘it’s never going to be that as it’s a serious disease!’ – I just didn’t know enough about it.”

Multiple sclerosis (MS) is a disease that impacts the brain and spinal cord which make up the central nervous system.  More than 130,000 people in the UK have MS and it affects almost three times as many women as men.  MS is a lifelong condition for which there is currently no cure however new treatments over the past 20 years have considerably improved the quality of life of people, like Alana, who live with the condition.

With a deep intake of breath, Marshall continued, “I’m set to finally start my treatment in around four weeks.  This last few months have been particularly tough, both physically and mentally.  If I’m honest, I’m not entirely sure how I’ve managed it.

“I have two lesions on my spine and a lesion on my brain. Every time I have a relapse, which I get no warning it’s coming, it results in another lesion.  I have regular flare ups and when I try to send signals, it causes me excruciating pain on the right side of my face which kind of feels like an electric shock.”

“What this has shown me however is just how strong I am.  But I think that’s mainly due to close friends and family telling me that they don’t know how I get through every single day doing what I do.”

With a shrug of her shoulders Marshall admitted that “I don’t know how I do it either and if I’m honest, I struggle a lot.  It’s like I’m so physically exhausted but I come here and it’s like some form of mental block as I have to get out there and train to a level that sets an example as being Captain of this great club.

“However I’m quite glad I continue to train three times a week and play at this level because as I’ve been so active in my life, the doctors have told me that it’s actually benefited me in tackling my MS.”

Alana is set to start transfusion treatment shortly and she knows everything will be OK. “I get my first lot 15 days apart and then it is every six months. I expect the treatment to take it’s toll but I’m going to remain positive throughout.”

“The treatment is meant to slow the progress of it right down so hopefully it minimises the painful relapses I get.  Through the transfusions, what it will do is likely perk me up for a period then we will have to revisit after a dip.  At the moment I can be like a bee buzzing about the place and the next day I feel as flat as a pancake – rarely do I experience two days the same.  Which is really frustrating as every knows me around the Club as Alana the joker and it’s just not been able to be like that for the last year – that’s been the hardest part.”

“I must say though that Debbi, the coaching staff and my teammates have offered me such fantastic and invaluable support and I’m so grateful.” 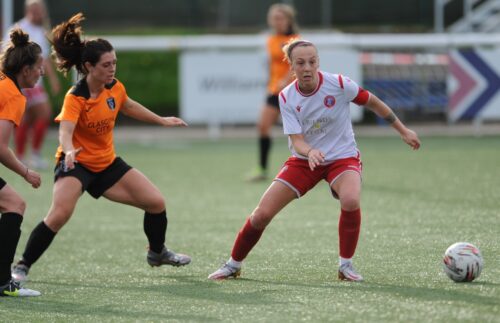 Spartans end their season this Sunday at Hamilton, but for Marshall, there’s no plans to hang up the boots just yet.

“Time will tell I guess and I don’t think I can speculate what’s going to happen as the treatment starts to kick-in.  I’m just not in control of what this does to me I’m afraid.  I’ve just been grateful for the symptoms that I have had have allowed me to still play, although it has been difficult.

“My intentions are that I will continue to play for Spartans as long as I am fit and able to.  I think physically I’m possibly in the best shape I’ve ever been, considering I’ve had a child just two years ago and the onset of MS too.  I may be 35 but I still race about that park like a 25 year old, that’s just the mentality I have though – I don’t give up easy!”

There’s a sparkle in the Skipper’s eyes as she speaks of the comfort drawn from the magic of motherhood.

“With having the wee one, I’m still trying to be the 100mph mother and it can be so exhausting, but she offers so much love during the tougher times.  She’s got two great Mum’s and we are lucky to have her, she’s the best thing that’s ever happened to us.  She’s does bring me a lot of comfort.

“She’s very empathetic towards me – sometimes you don’t get that from adults and she’s only two and a half!  She knows when I’m sad and wipes away the tears which offers me great strength and hope.”

You can find out more about Multiple Sclerosis via the MS Society website here https://www.mssociety.org.uk/about-ms