Spartans are delighted to announce the sponsorship of Bobbie Beveridge for the 2013 campaign.  Billy McNeil has already written a song for Spartans called “Spartans Are You Ready” which can be heard blaring out down at the Ainslie Park Stadium before home games. 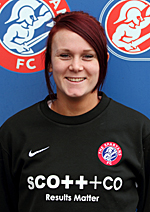 Having been a musician all his life, playing the bagpipes and the flute, Billy has taken to composing his own music available to buy through his website.www.cosmicpiper.com

The idea for composing a special song for the Spartans Women’s team came about after knowing Spartans full-back Bobbie Beveridge. Billy said: “Having known the Beveridge family for a number of years and having been extremely impressed with Bobbie’s dedication to her sport, I thought a Spartans song would be appropriate. On top of that Billy has decided to sponsor young fullback Bobbie for the season. Click below to hear Spartans song and to hear another favourite called SeaEagle.

Spartans Are You Ready