The Joy of Six for Spartans as Reserves continue winning ways 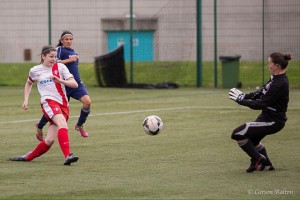 Spartans Reserves were back on home turf at Ainslie Park on Sunday and were looking to kick the second half of the season off in the same fashion as they did going into the summer break, in true goal scoring style, writes Kayleigh McNeill.

After a 2-2 draw back in May, the Reserves were going after all three points against the travelling Claremont Ladies in this Division 2 clash.

2 minutes in and the summer holidays were over for Claremont as the Spartans side broke away down the left hand side with a burst of pace from Lucy Brown who slid the ball past the keeper and into the back of the net.

The visitors started to edge their way back into the game with Chloe Gilhooley putting her body on the line as Spartans looked to keep hold of their slender lead. A long ball into the home box saw keeper Erin Rodgers collide with a Claremont forward, with enough contact made for the Referee to point to the spot.  It was a somewhat unfortunate decision against the young u17 keeper who proved that she is more than up to the challenge of competing in the Ladies game.

The first half was proving to be a midfield battle before Ashley Fish twisted and turned past the Claremont defence to slot the ball through to Nichola Sturrock who confidently curved the ball round the keeper to send Spartans into the lead on the stroke of half-time.

Just one goal separated the sides with 20 minutes left to play before the strength and depth of the Spartans bench put the spark back in the attack. Emma McNaughton picked out Sturrock who turned her defender before finding the bottom corner to grab her second of the day.

Four minutes later and a quick free kick by Ciara Donaldson to an unmarked Sturrock allowed the Captain to take her time before dipping the ball over the keeper to notch up another hat-trick in what’s been a profitable season in front of goal so far.

Ellie Simpson, another of the substitutes, got in on the action playing a neat ball through to Sturrock who made no mistake in from of goal.

Two minutes later and the fresh-legged 16 year old Simpson punished the tiring Claremont defence with a searching run before striking the ball with some confidence to find the net. The perfect solo goal to mark her first appearance at senior level, a rising star in the Spartans side.