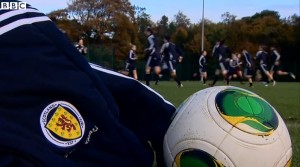 It’s time for a sporting chance in the media for the fairer sex, writes Spartans Women’s Media Manager Mark Brown.

2012’s Olympic legacy was a true celebration of women in sport. The coverage provided a platform to showcase talent; from references to the suffragettes in the opening ceremony to the glory of female athletes winning gold medals for Team GB.

A nation was on the edge of their collective sofas, they were cheering on in bars and watching on large screens across the length and breadth of the UK as female Team GB athletes picked up 36% of the entire UK medal haul.  There was a buzz on the buses, chatter on the Tube. It wasn’t just the number of women we were talking about, but also the way in which we were talking about them.

We were discussing the battles, their performance, power and skills — not just their hairstyles and love of shoes.  There was Nicola Adam’s gold medal in boxing – a triumph that finally broke the stereotype that boxing is a male only sport.

Since then we have had the exceptional Scottish infused GB Curling Team led by Eve Muirhead win the Bronze medal in the Sochi Winter Olympics.    We’ve also won medals in the Paralympic Winter Games too.  Kelly Gallagher, from Northern Ireland, took Britain’s first ever gold at a Winter Games, whilst Jade Etherington and Caroline Powell became the first Britons to win four medals.

If, as we are lead to believe, more women are taking part in sport since these Olympics, why is there is so little coverage in the sports sections of our media?

Currently, television coverage of women’s sports is inconsistent at best and non-existent most of the time.

According to researched produced last year by the Women’s Sport and Fitness Foundation, in the UK today, only 5% of sports media coverage is devoted to women’s sport.  However, over 60% of sports fans say they would like to see more women’s sport on the TV.

• The public is unaware of women’s sporting events and women’s achievements in sport,

• There are few widely known positive role models for women and girls, and

Whilst Women struggle to make the news, they remain in the minority who deliver it too. The Sports Journalists’ Association [SJA] is the world’s largest independent organisation for professional sports journalists. Members include British-based writers, photographers, editors, cartoonists and broadcasters.  But here’s the catch. The organisation has more than 700 members, of whom just 10 per cent are women. Of these, around half work in PR and other fields, leaving the rest as “frontline” sports journalists.

Perhaps a feature for another day, but there is also the huge disparity in the difference female sports stars earn in winnings.

The World Twenty20 cricket tournament awarded £618,000 to the men’s triumphant team while only £38,000 went to the female champions.  This year’s Men’s FA Cup winners will get £1.8million but the women receive £5,000. Bucking the trend is Wimbledon which is one of the few competitions where the prize money is equal.

I’d like to give you a task before the next home game.  Look at your daily newspaper(s) of choice. How many stories are exclusively about Women’s Sport, whether it be grassroots or otherwise?  Why not tweet us at @spartanswomen your findings?

In terms of the SWPL, the Edinburgh Evening News carries a small column on a Tuesday reviewing the weekend’s action and the Scottish Sun have kicked off an online blog every Friday (behind the paywall) but other than that, there’s not much happening to promote the top tier of Women’s Football in Scotland.

On the plus side, Peter Ross penned a fantastic piece last weekend in the Scotland on Sunday that’s earned many plaudits from inside and outside the game.

The Scottish Women’s National Team’s trips to Brazil & Cyprus were ideal platforms for the Scottish media to promote the game ahead of the World Cup in 2015, a tournament which has seen the Scottish Government invest £200k to help deliver success.

Those of us lucky enough to track down the grainy pictures on a Brazilian live feed could watch the action.  In the Cyprus Cup, there was intermittent coverage on ESPN but none of the Scottish games featured and it was left for social media to play its part once again to keep those back home up to date.

This simply wouldn’t happen in the Men’s game.   Thankfully, BBC Alba will be showing Scotland’s World Cup Qualifier v Poland live, this Saturday from 5.30pm.  The match is being played at Motherwell’s Fir Park Stadium.

Earlier this month, Former Olympic cycling champion Nicole Cooke caused a stir by calling on the BBC to give the same amount of coverage to women’s sport as it does to men’s.

The BBC responded by stating it broadcast about 1,000 hours of women’s sport every year, with 20% of their coverage dedicated to women’s sport.

Cooke, the 2008 Beijing Gold medallist said, “I think young girls who are active and who play sport will always be asking where they want to get to, and what their ambition is.

“There is a very obvious lack of women role models and that is because they are invisible.

“There are lots of female athletes out there achieving great things, but there aren’t the role models to aspire to like there are on the men’s side.”

Cooke is correct.  Boys grow up watching television, bombarded by heroic and confident images of themselves playing sports and being revered for their accomplishments. They know they are expected to play sports and are encouraged to do so by everyone around them. I know, as I was once that young boy.  I spent many days in the school holidays pretending I was Kenny Dalglish down Portobello Golf Course with jumpers for goalposts with my friends.  Obviously I wasn’t, but you’ve sometimes got to live the dream!

Girls do not receive these messages.  Sporting icons, sporting heroes and sporting opportunities need to happen to turn this around.