Thrill for McGill as Reserves hit five without reply 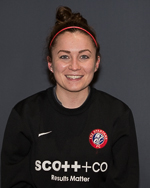 Spartans Reserves notched up their first SWFL win with a 5-0 victory over Edinburgh South.

A hat-trick from Nichola Sturrock and a double for Helen Lyon saw Spartans kick-start their league campaign at a bitterly cold Ainslie Park.

Spartans took the game to their spirited opponents from the start, taking control from the outset – a feature that was set to dominate large parts of the game.

It took 8 minutes for the home side to get the first goal on the board.  Lyon grabbed the first of her brace of goals after latching on to a superb through ball before taking on the keeper in a one-on-one to open the scoring.

Goalkeeper Steph Ireland pulled off a great save to deny South from drawing level, coming off her line to rush the opposition striker into a shot that she pushed to safety.

Shortly after, an inch perfect reverse pass from the impressive Lucy Brown gave Sturrock the opportunity to double the lead, sending her net-bound shot with pace into the bottom right hand corner.

Lyon’s second – and Spartans third – came after a superb move down the left wing saw a well weighted cross swept across the face of the box for the striker to run on to and stroke the ball into the back of the net.

Sturrock made it four in some style with a free-kick from out by the corner of the 18 yard box.  The right footer looked up and struck the ball with power and height, evading the wall and finally seeing the leather sphere nestle high into the top far corner, earning applause from the awaiting Men’s team warming up behind the goals on the Community Pitch.

A tenacious piece of fighting to win the ball in the box gave Sturrock the opportunity to score her first ever hat-trick for the Club.  The Player/Coach managing to squeeze the ball between keeper and post to round of a tremendous individual and all round team performance that pleased interim-Coach Walter McGill.

“It was a fantastic work ethic on pitch today.  It was the right attitude which produced a winning mentality and a controlled display by all.

“The team did everything they were asked to do which was extremely pleasing and rewarding to me.  Other than the goal scorers, notable performances included Emma Curson, Emma McNaughton, Kim Goodchild, and Lucy Brown whilst all 5 subs contributed well to the overall team performance.

“The performance, both on and off the pitch, definitely lived up to the club motto “Live Together, Play Together, Win Together” which will set them in good stead for the rest of the season.”