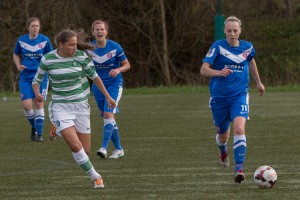 Spartans finish their August tour as they head west for their final leg of a hat-trick of back-to-back away days with a trip to Barrowfield to take on Celtic in Round 14 of the SWPL.

This weekend sees yet another series of close encounters of an SWPL kind with just four points separating 5th from 2nd place as the chasing pack seek to pounce on any Glasgow City slip-ups between now and early November.

Spartans Manager Debbi McCulloch is keen to avenge the narrow defeat against the Hoops back in April at Lennoxtown, “We’ve only played Celtic once this season so far and I thought we were perhaps hard done by to lose that game.  We had the bulk of possession on the day but we fell to a goal from a long ball which was disappointing.

“We’ve progress significantly since then and with players coming back from injury as well, we’ve got further strength in numbers and it offers more options too.”

It was a late show to despatch Forfar in the Scottish Cup last week on top of a fantastic team performance at Aberdeen and McCulloch is looking to continue an impressive start to the post-split campaign on Sunday.

“We continue to build on recent successes and whilst we probably done things the hard way to win last Sunday, training has gone well this week and we look forward to a welcome challenge against Celtic.  We’ll be looking at their strengths and weaknesses and preparing accordingly for what will no doubt be tight, tough battle.  But we’re right up for it!”

The match will be played at Barrowfield, kick-off 4pm.