U/17s: Sturrock’s stars are fired up for Forfar Final showdown 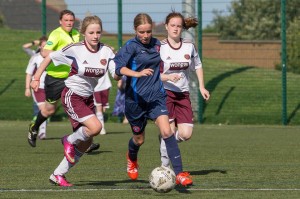 After a dramatic semi-final penalty shoot-out win against Jeanfield Swifts, Spartans u/17s head to St Andrews on Saturday where they take on Forfar Farmington in the Final of the League Cup.

For Spartans Head Coach Nichola Sturrock, it’s a shot at silverware her side have deserved following a strong showing in the Group stages. “I’ve been very impressed by the attitude of the players and the talent on the pitch.  Myself and the other Coaches are more than aware of what our girls are capable of and we head into Saturday’s Final on merit.”

The road to the Final included an six goal thriller at the Academy against Hearts. The 3-3 draw against the girls in maroon earned Sturrock’s team the single match point required to progress into the semi-final against a strong Swifts side.

Heading into the second half a goal down, it took a goal from Ronaigh Douglas, who has benefitted from being part of Debbi McCulloch’s SWPL plans this season, to force the game into extra-time.

Neither side could find the winner during the additional twenty minutes meaning the game would be decided by the lottery of a penalty shoot-out.

Not only did she save from the spot,  Scotland u/16s goalkeeper Eartha Cumings calmly slotted one past her Swifts counterpart to set Spartans on their way. Further successful penalties by Kayley Robinson, Courtney Edwards and Ronaigh Douglas gave their side a 4-2 victory and a place in the Final against Forfar Farmington.

Sturrock is looking forward to the challenge against a Forfar side who sit second top of the League. “Forfar will be tough opponents for us and we’ve already seen what they are capable of if we allow them to play football. However, since our meeting with them on league duty back in June, our team have grown in confident and in stature.

“To reach a final in any competition in any sport is a special achievement in itself and it’s an experience that we will be encouraging our girls to soak up and saviour. I can promise though that we will give everything we have to bring the League Cup trophy back down the road to the Academy after the final whistle.”