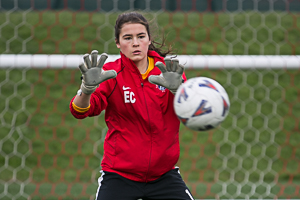 Spartans teenage goalkeeping starlet Eartha Cumings has been named in Pauline Hamill’s Scotland Women’s Under-17 squad for this month’s friendlies against Belgium.

The SWPL and U/17s shot stopper will be hoping for a stint between the sticks when  the young Scots play a series of friendlies at the National Football Centre in Tubize between Monday 23rd – Thursday 26th of February.

One of the first to congratulate the 15 year old was SWPL side’s No.1 Rachel Harrison, “Eartha is a great talent and really wonderful girl.  It’s fantastic to see her progressing into a first class young goalkeeper and she’s always pushing herself to be better.   She has already enjoyed 1st team experience with the side and  is destined for a flourishing footballing career.”

Scotland face Slovakia, France and Poland in next month’s UEFA European Championship Elite Round, with the winner of that group qualifying for the finals in Iceland.