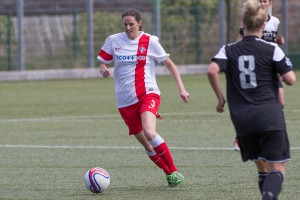 Spartans welcome Celtic to Ainslie Park in Round 8 of the 2015 SWPL season with both teams heading into the clash on the back of scoring seven without loss last weekend.

Despite their convincing victories last week, the sides have had an inconsistent start to the league campaign and the respective benches will be looking for three points on Sunday to close the gap at the top of the table.

Last time out, Spartans won 4-1 at Ainslie Park however it was the Glasgow outfit who secured a 2-1 advantage over the trio of games across the 2014 season, an outcome Ciara Barnes is determined not to repeat.

“Celtic are always tough and competitive opponents and they’ve had a similar start to the season as ourselves. It’ll be a slightly different side to the one we played last season as there’s been a few changes to their squad therefore Sunday will be an interesting encounter.

Spartans got back to winning ways last week with a 0-7 victory, a reward for the 7.30am start and 12 hour round trip to Inverness.

“Away trips are always a bit more difficult with the long drive and the early start, so it was good to go up and get some goals on the board, especially after the 0-0 draw the week before. We felt quite frustrated after the Aberdeen game so it was great to pick up the momentum once again.

“If we play the way we can and stick as a unit, we’ll continue to deliver results throughout the season. It was good to see all three of our strikers hit the net last week too and keeping back-to-back clean sheets has been particularly pleasing for me.”