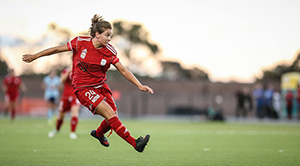 Louise Mason is heading back Down Under to take up a full time contract playing for Melbourne outfit Boroondaga Eagles in what she describes as “an opportunity to eat, sleep and breathe football.”

The Eagles were promoted to the Premier League last season, the top tier in Victorian Women’s football, a marvellous success story for a team who only starting playing Senior Level in 2011.

It’s a second stint in Australia for Mason who played in Adelaide during the Scottish close season.  The opportunity to head back came as a bit of a surprise, Louise explains, “One of the girls I was playing in Adelaide with has now signed for Boroondaga and they contacted me when I got back last month to ask if I was interested in coming back over, which I have to say was a bit of a shock.”

The pace of the move has taken the 21 year old slightly by surprise, “It’s all been quite rushed to be honest and I’ve not even had time to sit down and let it all sink in.  I had to make a decision really quickly and my first port of call was to speak to Debbi (McCulloch, the Spartans Manager) to discuss the opportunity.”

Mason added, “I don’t want to leave the Club, I love it here.  They’ve given me absolutely everything I could wish for at Spartans and I obviously hope to come back in the future, however I think this is an opportunity that a lot of girls don’t get, especially from Scotland and I really couldn’t turn it down.”

Louise departs the Capital on the 25th March and will arrive in time for the opening round of the Australian league calendar on the 30th.

“I arrive on the 27th and hope to get a couple of training sessions in with the girls before the game on the Sunday at home to Bundoora United and it’s definitely my intention to make my debut at some stage during the game.”

Everyone at the Club wishes Louise all the very best on her new adventure and we’ll be keeping an eye on her progress throughout the season.