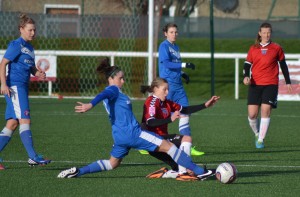 Spartans kicked off their pre-season with a 0-2 defeat at home against English Super League side Durham.

Manager Debbi McCulloch had the opportunity to see new signings Nicola Mawson and Michelle Russell in Spartans colours for the first time however there was a late change between the sticks with Charlotte Ferguson replacing Rachel Harrison who was unavailable due to illness.

The match started in frantic fashion with both sides having the ball in the net within the opening six minutes – neither team however gaining advantage courtesy of the respective linesmen flagging at either end of the field.

Kerry Montgomery came close when her shot was well saved by Anna Moorhouse, followed by Ciara Barnes rattling the crossbar from six yards out.

The low setting early sun was causing visibility issues for the players with the goalies having some difficulty in a game that saw decent football from both sides in what was the first fixture of the New Year for each outfit.

Spartans had one final opportunity before the break however the ball ricocheted off a plethora of legs in the Durham box like a proverbial pinball and was finally hoofed to safety, leaving the visitors goal intact.

A sea of changes at the interval saw the introduction of Kerr, Pagliarulo, K. McLaughlin, Russell, Beveridge and Douglas in the outfield, whilst Ferguson swapped gloves at the break with her namesake and fellow Edinburgh Uni Students colleague Parker-Smith.

On the hour, the deadlock was broken.  Debutant Becky Beech latched on to a defensive lapse and calmly slotted the ball past Parker-Smith to open the scoring.

Captain Katie Reilly came desperately close to cancelling out the deficit moments later however her attempt was well saved by the impressive Durham keeper.

With 15 minutes left on the clock, the tourists doubled their advantage when Nat Henderson’s free-kick evaded the grasp of Parker-Smith’s gloves and the Edinburgh Uni student could only watch in agony as the ball took an age to crawl over the line.

A final siege on the Durham danger zone in the closing stages saw Trish McLaughlin’s strike from inside the box pull wide of the post and with that, it was the visitors who headed back over the Border with the win.