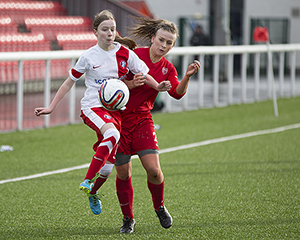 Spartans continued their winning start to their pre-season campaign with a hard fought 2-0 win over fellow SWPL side Hamilton Accies.

Second half goals from Steph Briggs and Lana Clelland were enough to seal a victory in what were awful conditions at Ainslie Park.

Head Coach Mike Ross was happy with the win, “Naturally we’ve got to be happy with the win against a Hamilton side who were missing a few players who I’m sure will be back here on the opening day of the season. “

The first half saw both sets of players having to contend with an onslaught of driving cold rain, virtually making it difficult for the twenty two players on the park to provide the spectators with much to discuss over their pie and Bovril at half-time.

Montgomery’s speculative long range effort perhaps the pick of the action in a relatively incident free forty five minutes of football, a point that frustrated the Spartans Coach.

“There was a lack of rhythm to the half with the ball spending what felt like more time off than on the pitch”, noted Ross. “The fractured structure to the game resulted in some poor decision making forcing us to surrender possession, putting ourselves under some unnecessary pressure.”

Half Time changes by Spartans saw Harrison, Douglas and Donachie replace Lessells, Shepherd and Nicolson as the home side looked to offer game time to the squad as the countdown to the start of the SWPL season continues.

The tempo of the game increased directly from the restart as Spartans pushed forward, keen to capitalise on their early pressure.

Captain Reilly took over the armband after replacing Paterson in the 50th minute as the game opened up in the wind and rain.

The conditions played a key role in securing the opening goal. A corner from Briggs curled in to the six yard box and took everyone, including the Accies keeper, by surprise and nestled into the back of the net. 1-0.

Sophie Cunningham came off the bench with 20 minutes to go, replacing Ewens to join her Spartans U/17s colleague Ronaigh Douglas.

Clelland and Beveridge came on to freshen up proceedings and the former secured the win with five minutes to go after latching on to a long through ball before knocking it past the keeper to leave her the unguarded net to stroke the ball home. 2-0.

Speaking of the two youngsters gaining valuable experience and game time today, the Coach was delighted with the outcome. “We’ve had a few niggly injuries and we were cautious to not risk those who require recovery time. This allowed the opportunity for the pathway we have in place at Spartans to promote some of the u/17s.

“Ronaigh came on at half time and did extremely well, getting involved in quite a lot of the play and looked dangerous. Sophie came for the final 20 minutes and worked very hard around the pitch despite not seeing much of the ball. It’s certainly exciting to see our young talent getting involved.”