Yanks for the memories! University challenge ends all square 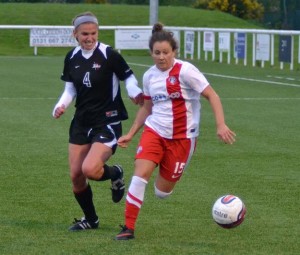 A Louise Mason thunderbolt strike midway through the second half earned Spartans a 1-1 draw against Tulsa University in Thursday night’s International Challenge Match at Ainslie Park.

Spartans had the bulk of the early possession as they looked to find a way past the athletic tourists however it was Tulsa who broke the deadlock against the run of play in the 20th minute.

Kajal Parmar was the toast of Tulsa after Miranda Zoller burst into the Spartans box before sliding the ball across the face of the six-yard box to allow the former Canadian U/17 Internationalist to score from close range.

Claire Nicholson almost made it two when she evaded a Kirsty Hamilton challenge to set up a goal scoring opportunity. Thankfully for the home side, Steph Briggs was in place to clear off the line and send the ball to safety.

Sarah Ewens looked dangerous with the ball at her feet as the home side set about searching for an equaliser however the well organised Tulsa defence held strong and the teams went in at the break with the Americans in the lead.

In a game littered with rolling substitutions which broke up the opportunity for much in the way of momentum, the clash had an ‘exhibition match’ feel about it but there were flashes of physicality throughout with both teams keen to get stuck in.

There was a sense of frustration rippling through a Spartans side who were desperate not to be beaten on their home ground.

It took a special strike to save the day and bring the scores level. Louise Mason picking the ball up from some 25 yards before unleashing an unstoppable drive that flew into the top corner of the Tulsa net.

As the sun set over the North of the Capital, both sides looked destined to share the spoils and it took a top drawer save in the dying stages from teenage substitute goalkeeper Eartha Cummings to prevent Kyle Cussen’s side from recording a win on Scottish soil.

Speaking afterwards, Tulsa University Head Coach Kyle Cussen said, “It was a fantastic opportunity to visit Edinburgh as part of our trip and it was a great experience to play against Spartans at their excellent facilities.

“Let’s be honest, we took the lead against the run of play. Spartans had the bulk of possession for the opening 20 minutes and we just couldn’t get out of our half. Once the game settled down and we started playing a little bit we got back into the match and we were perhaps a little fortunate not to concede a goal early on, but when we managed to get one ourselves, it was the icing on the cake for us.

“We played far better in the second half, but what a top level strike by Louise Mason to bring the scores level. The draw was perhaps a fair result on the night and it was useful for us to get game time too.”

Under the guidance of Martin Tierney of tour operators Soccer Experience, Cussen takes his squad back across the Irish Sea for the next leg of their 12 day adventure where they will play Northern Ireland ladies.